I traveled to Macau in mid December. I went around the World Heritage sites in Macau Peninsula in the first half and mega resorts in Cotai area in the latter half. In this article, I will write about night walk around Lisboa as part of Day 1.

Following the previous post, after checking in “Hotel Lisboa (澳門葡京酒店)”, I will walk around Lisboa in the evening.

This was “Wynn Macau (永利澳門)”, which was located near Lisboa. Wynn Macau was famous for its fountain show (“Performance Lake”), but as you can see, it was cloudy, so I will return to it later in the evening. 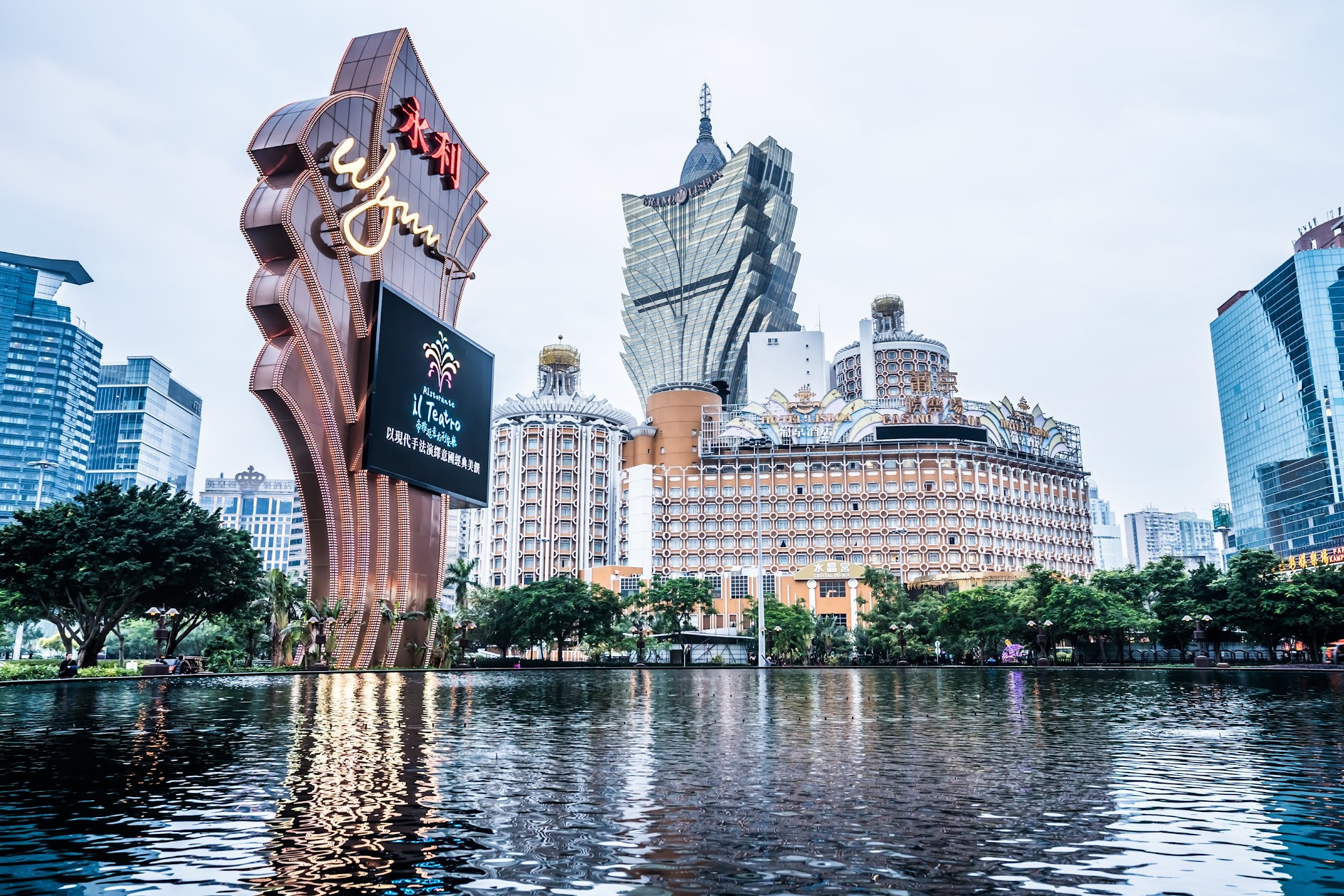 To begin with, I visited “MGM MACAU (澳門美高梅)”. 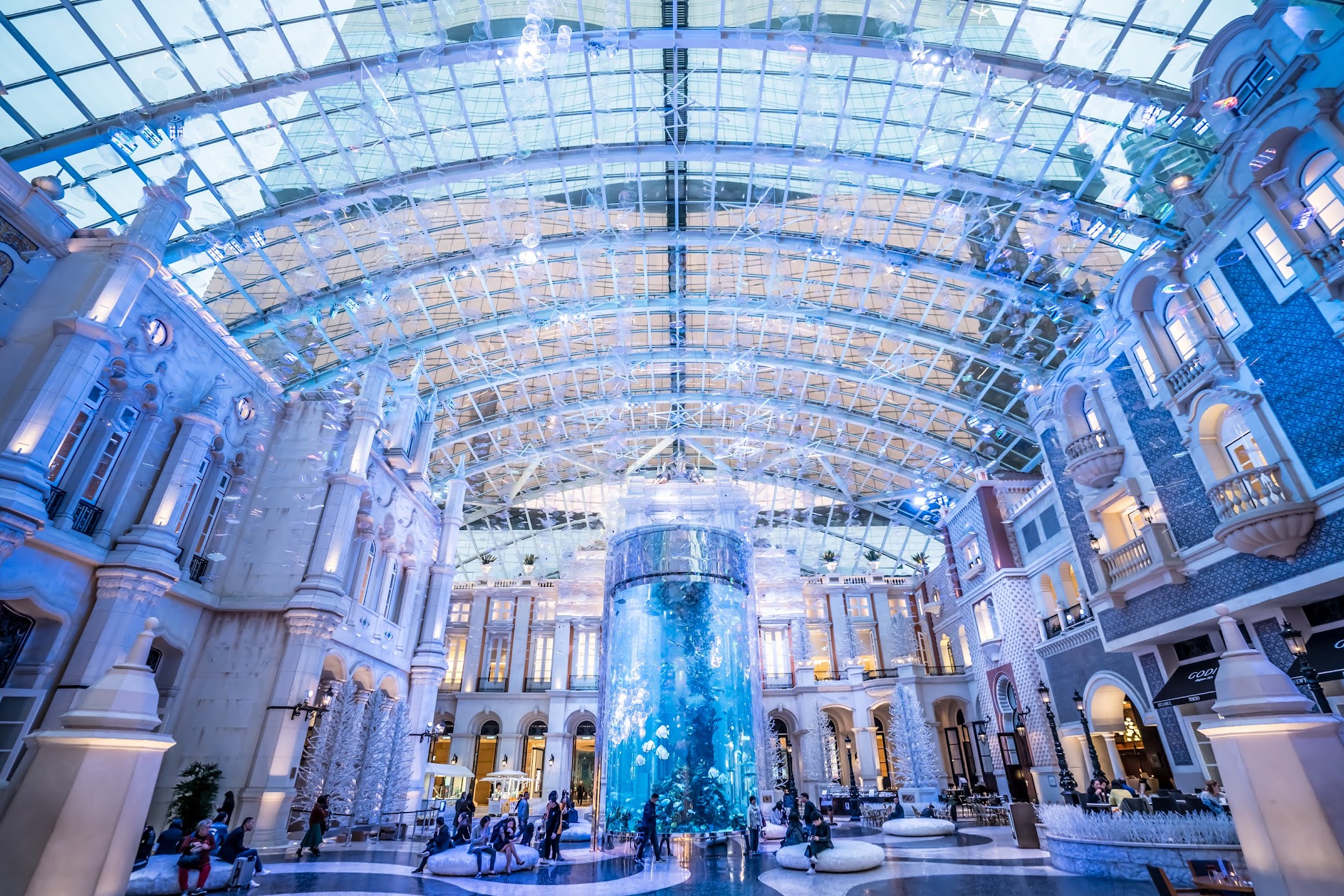 One of the attracting features in MGM MACAU was a breathtaking 8-meter tall cylindrical aquarium. 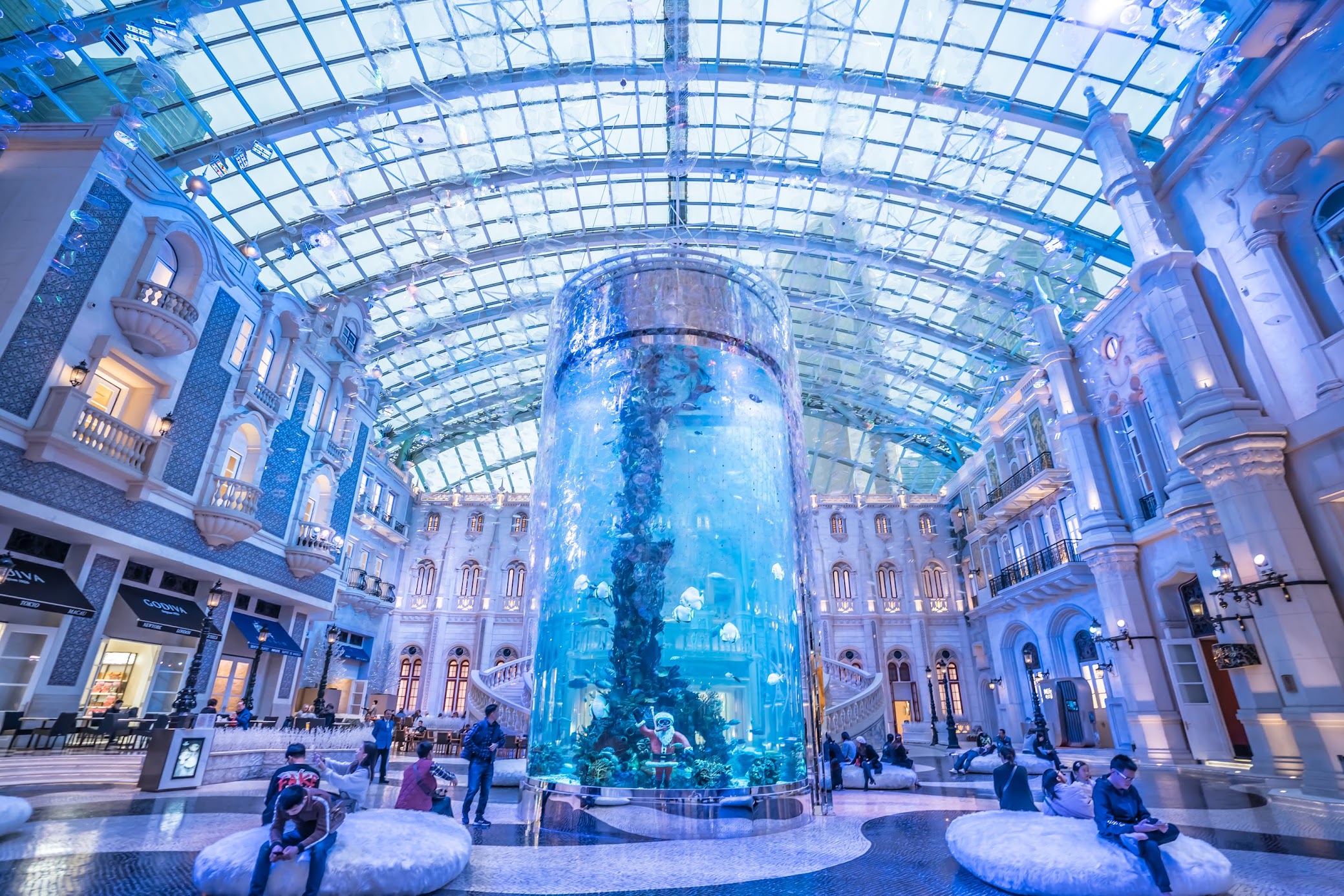 Since I visited it in Christmas season, a Santa Claus object was placed in the aquarium. 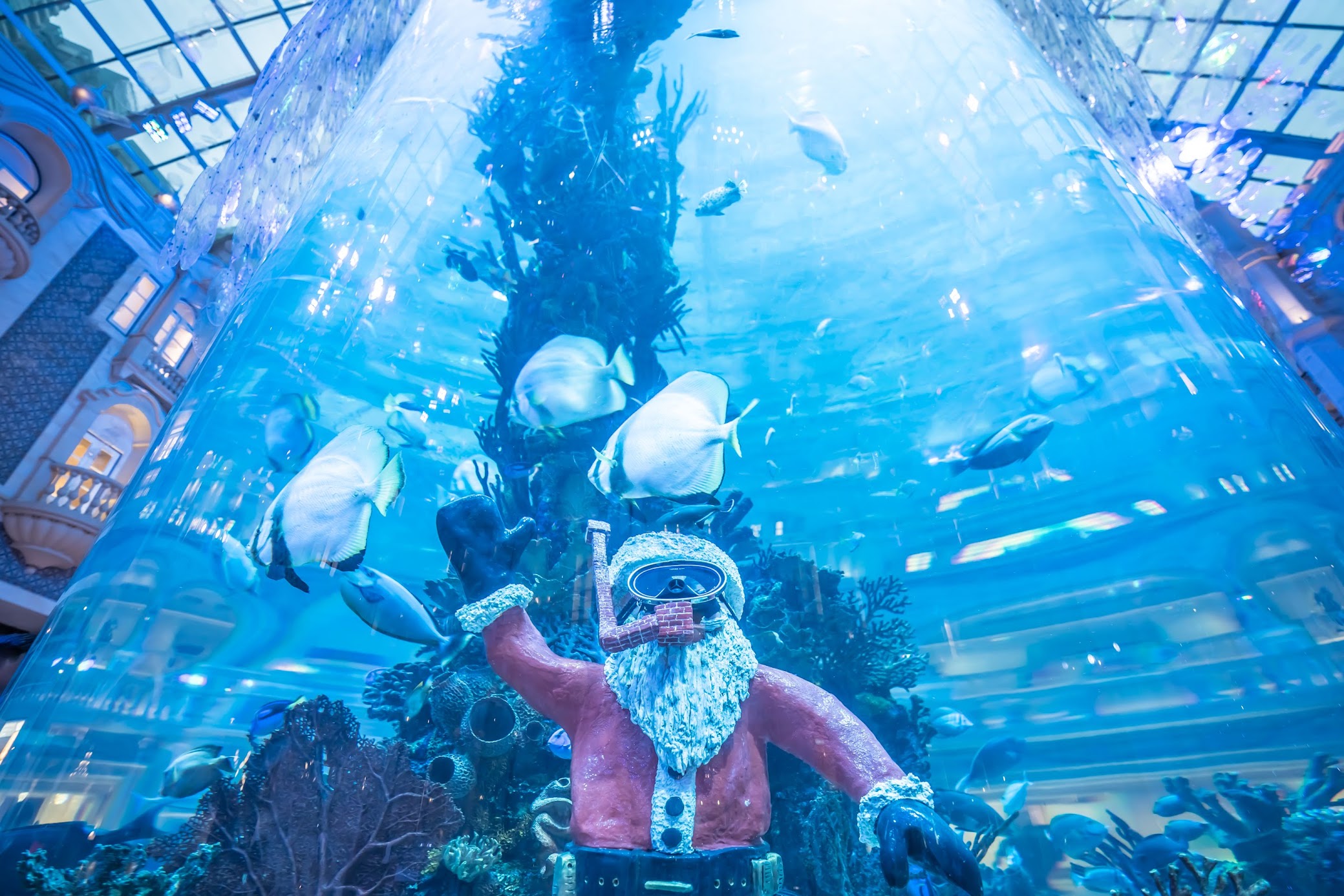 A shopping mall was also located in MGM MACAU. When I went out of the building, it was just around sun set. 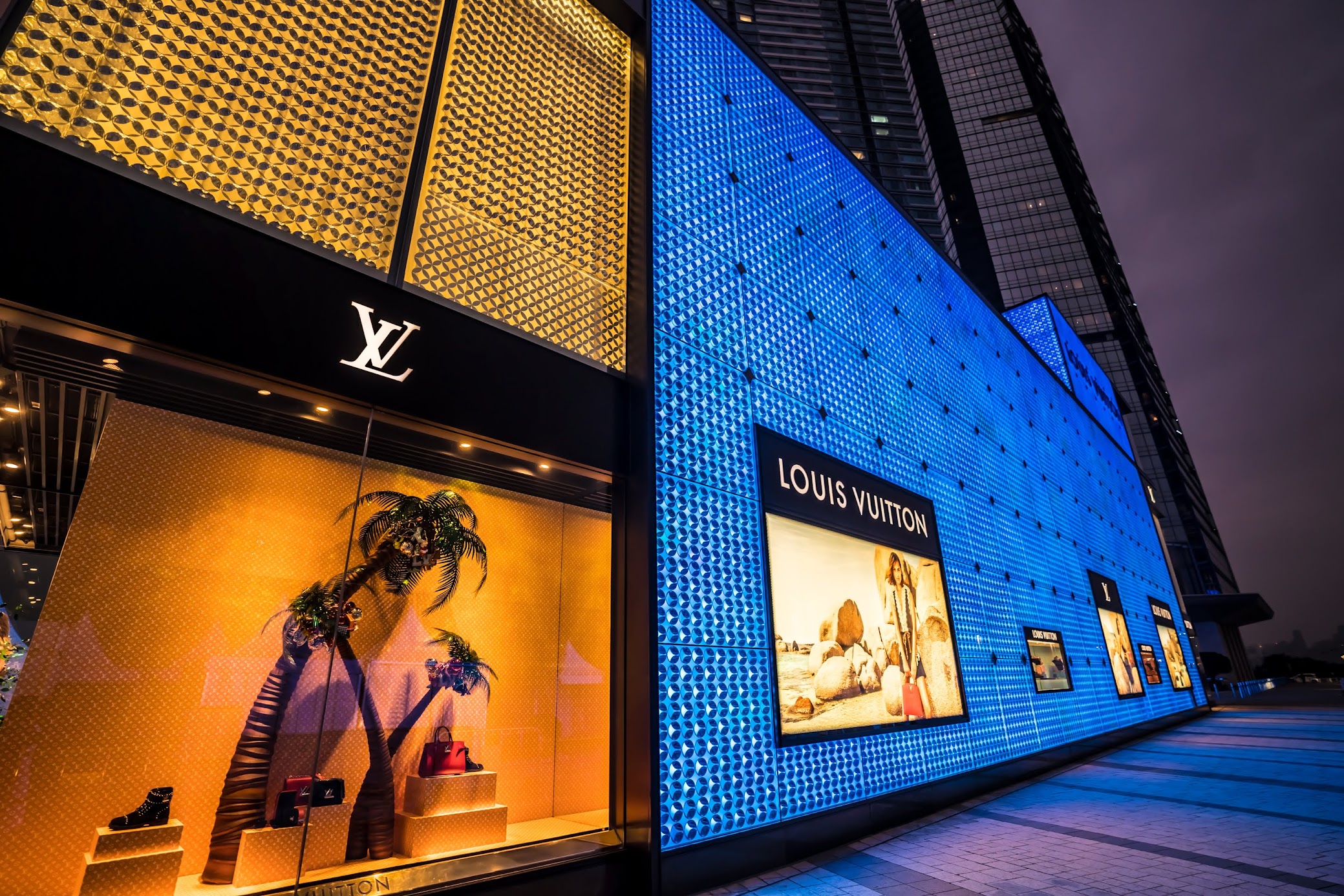 If I were rich, I would be able to enjoy shopping at these luxury outlets 🙂 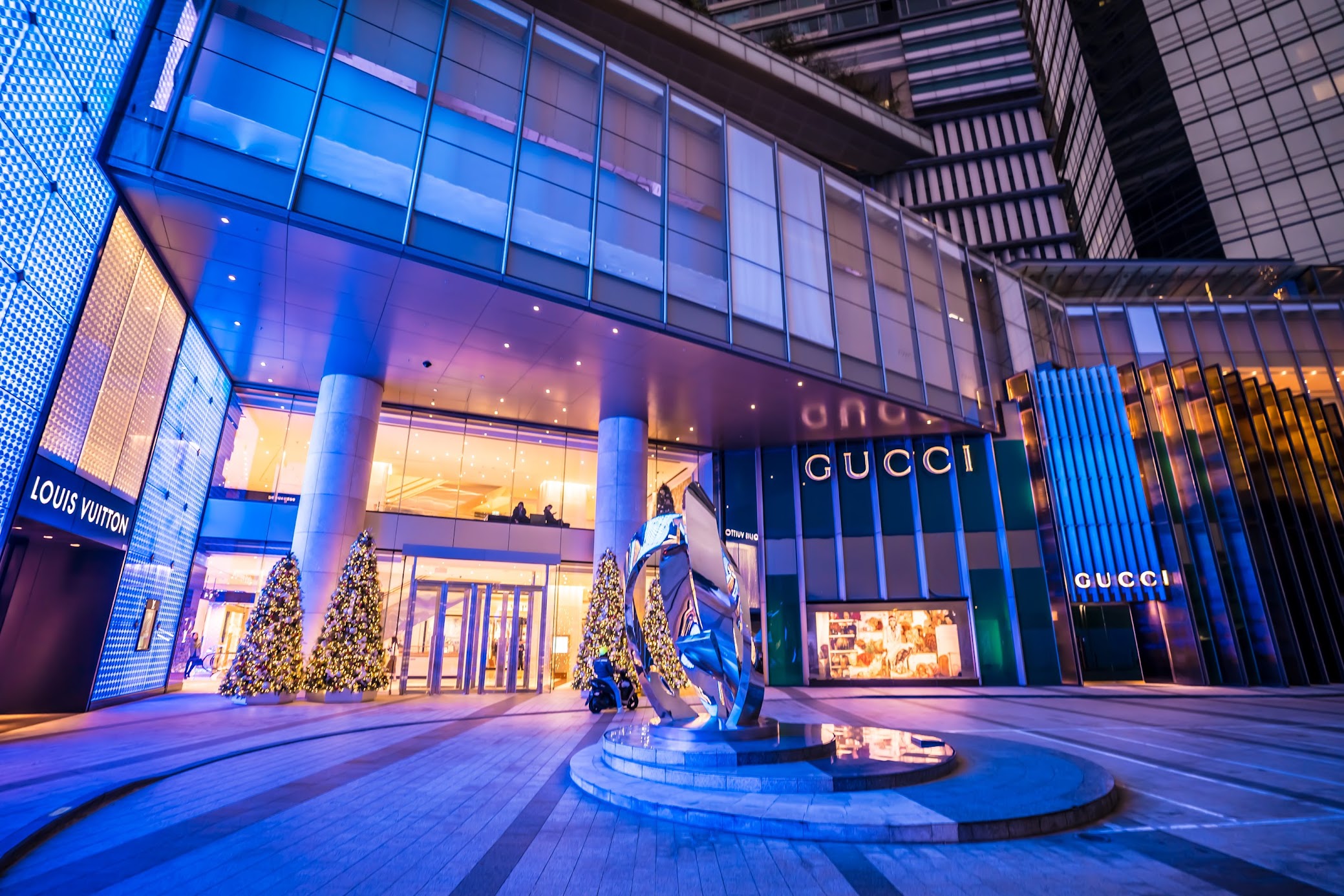 There was a promenade near MGM MACAU and I will walk around it. 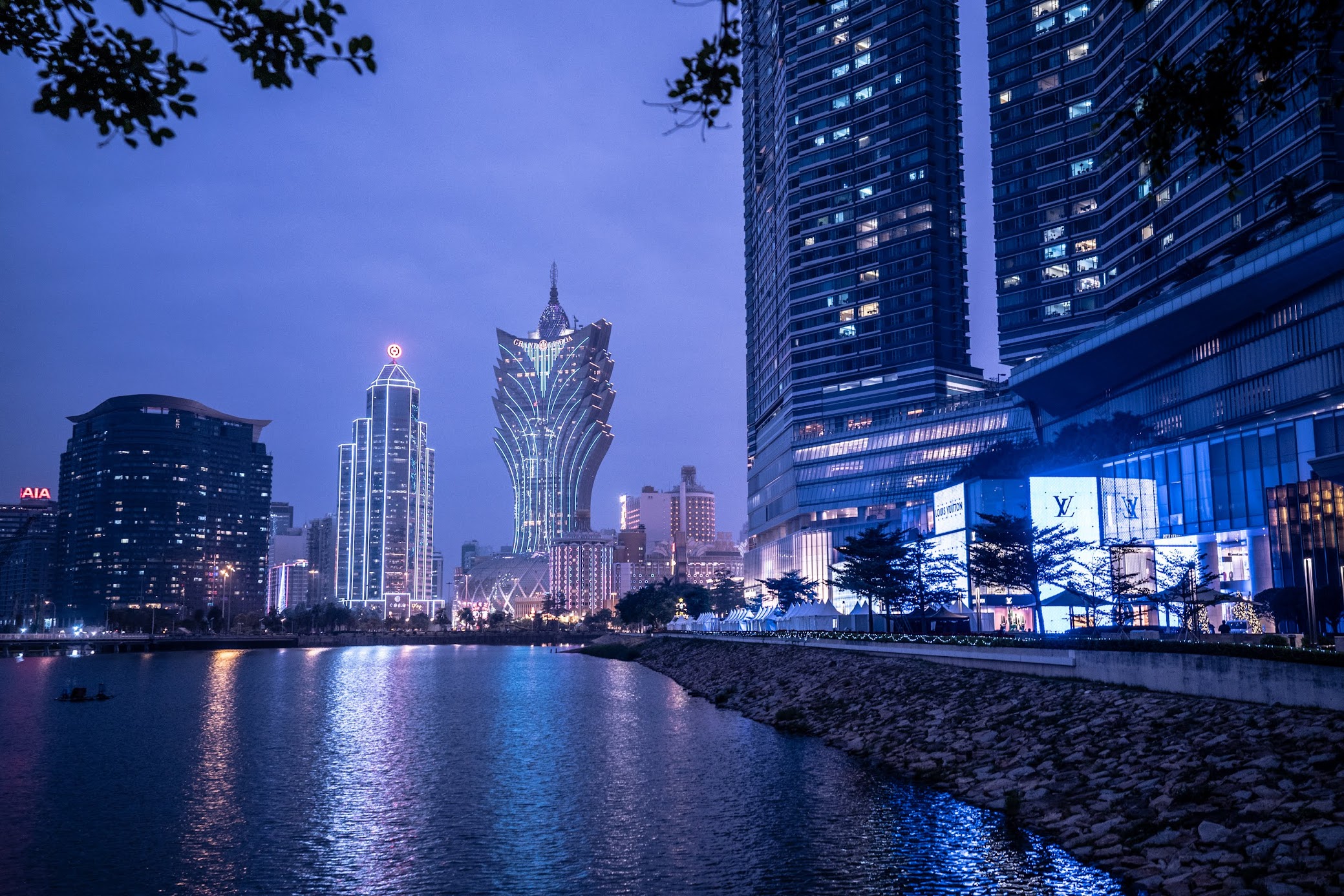 The promenade faced a man-made lake “Nam Van Lake (南灣湖)” and the area was famous for its nice night view.

This bridges connected Macau Peninsula with Taipa and Cotai area. 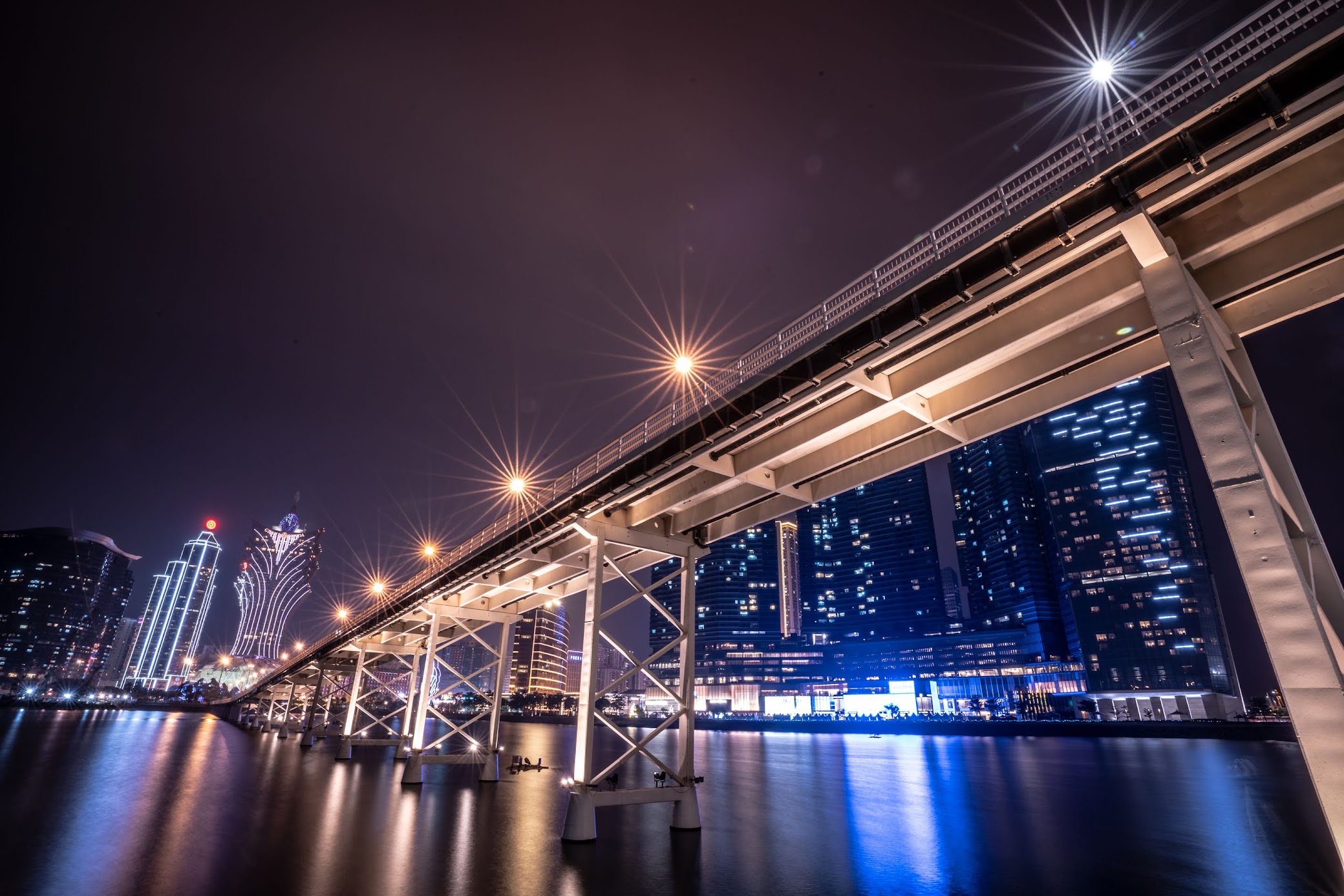 The tall tower over there was “Macau Tower”. 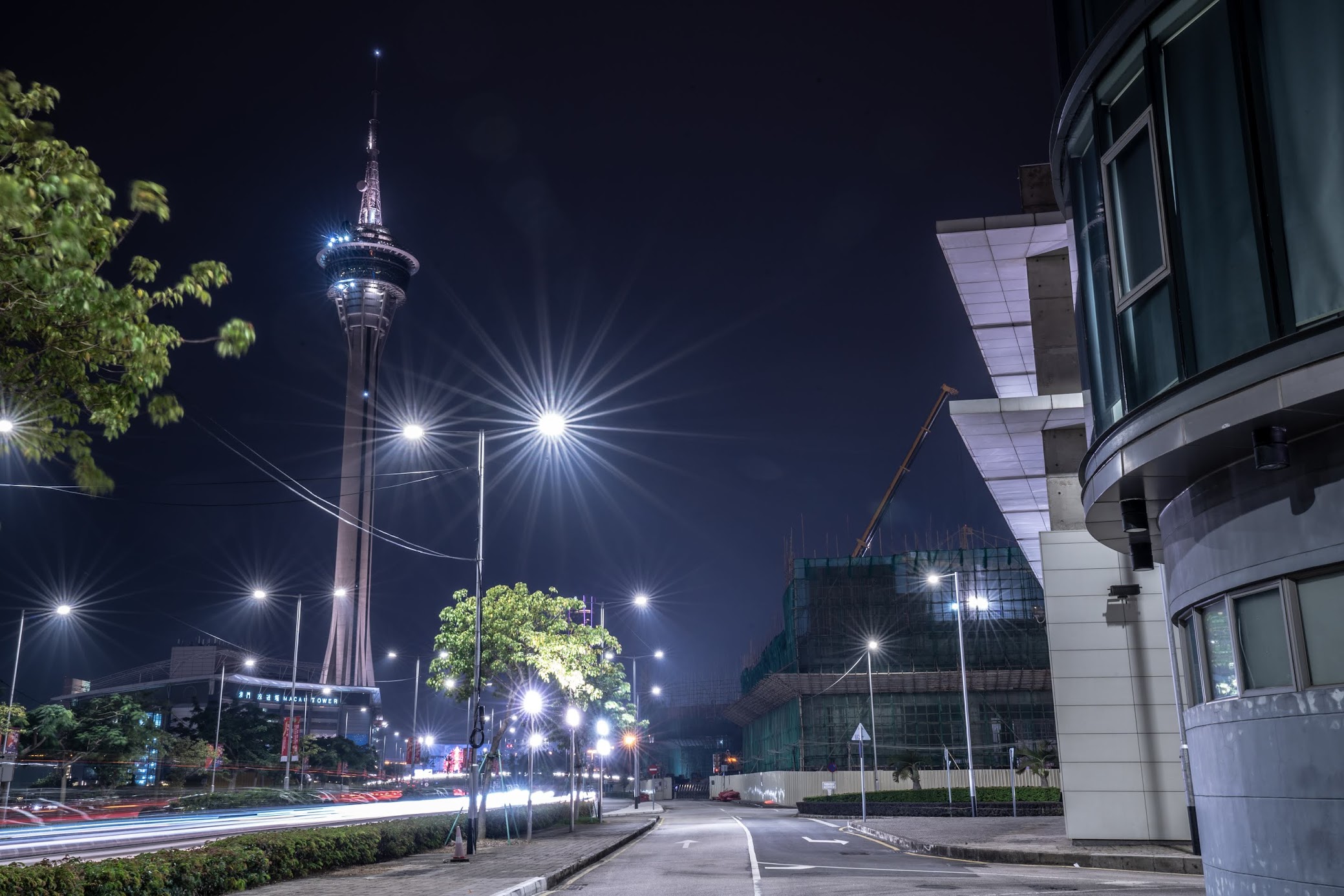 Another shot of Macau Tower. 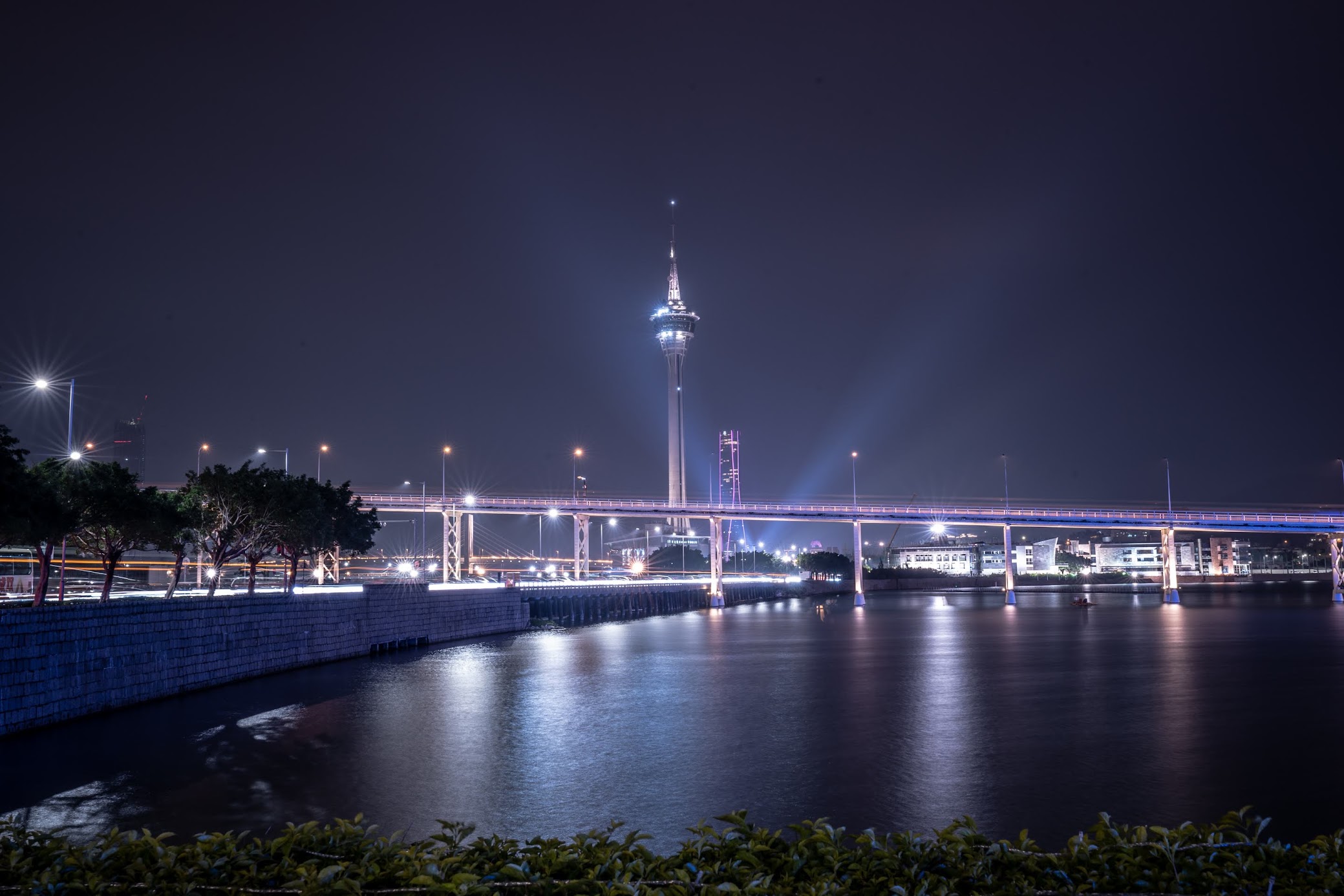 I returned to MGM MACAU. Since its shopping mall was very photogenic, I will take pictures again around here. 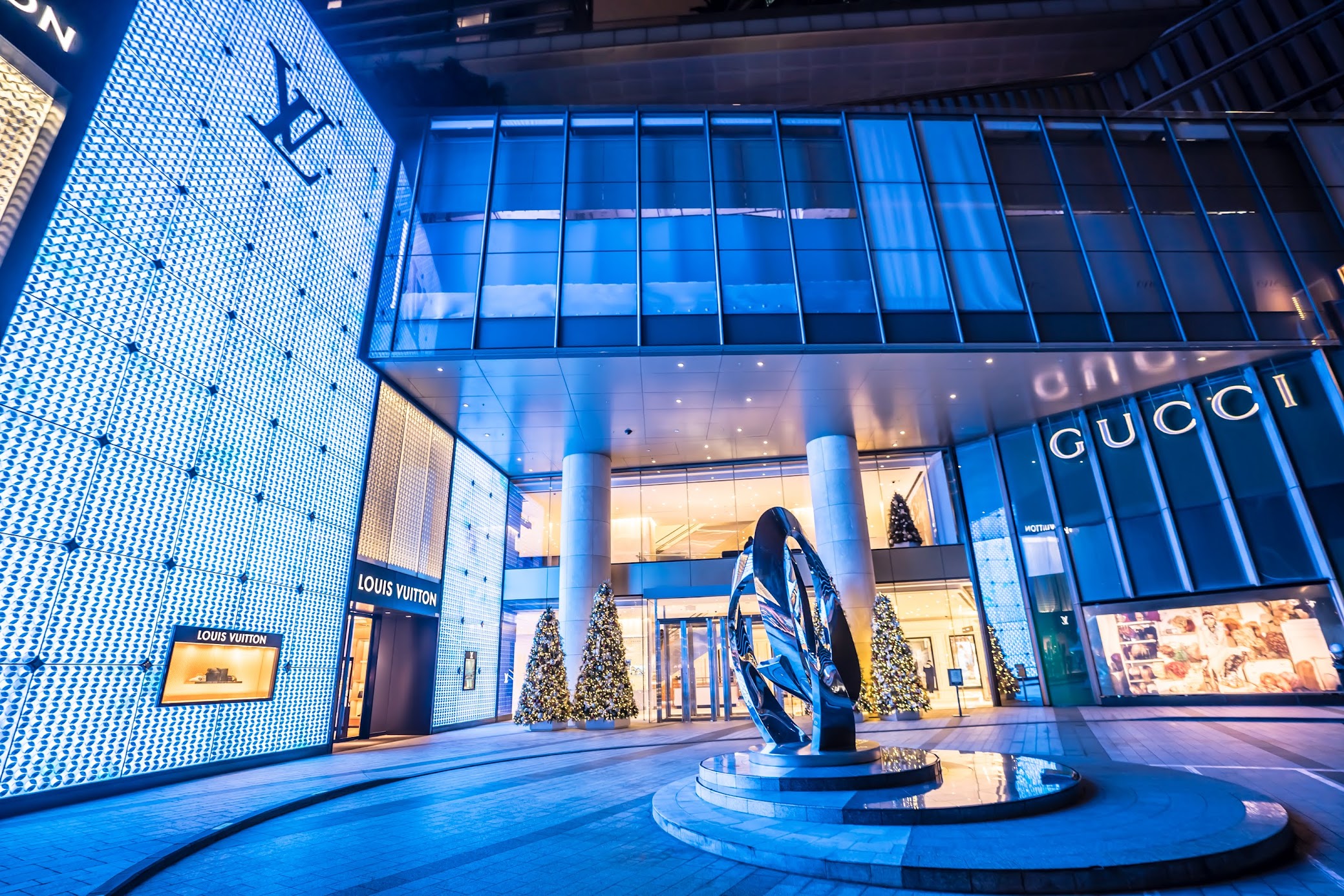 Here are some snaps. 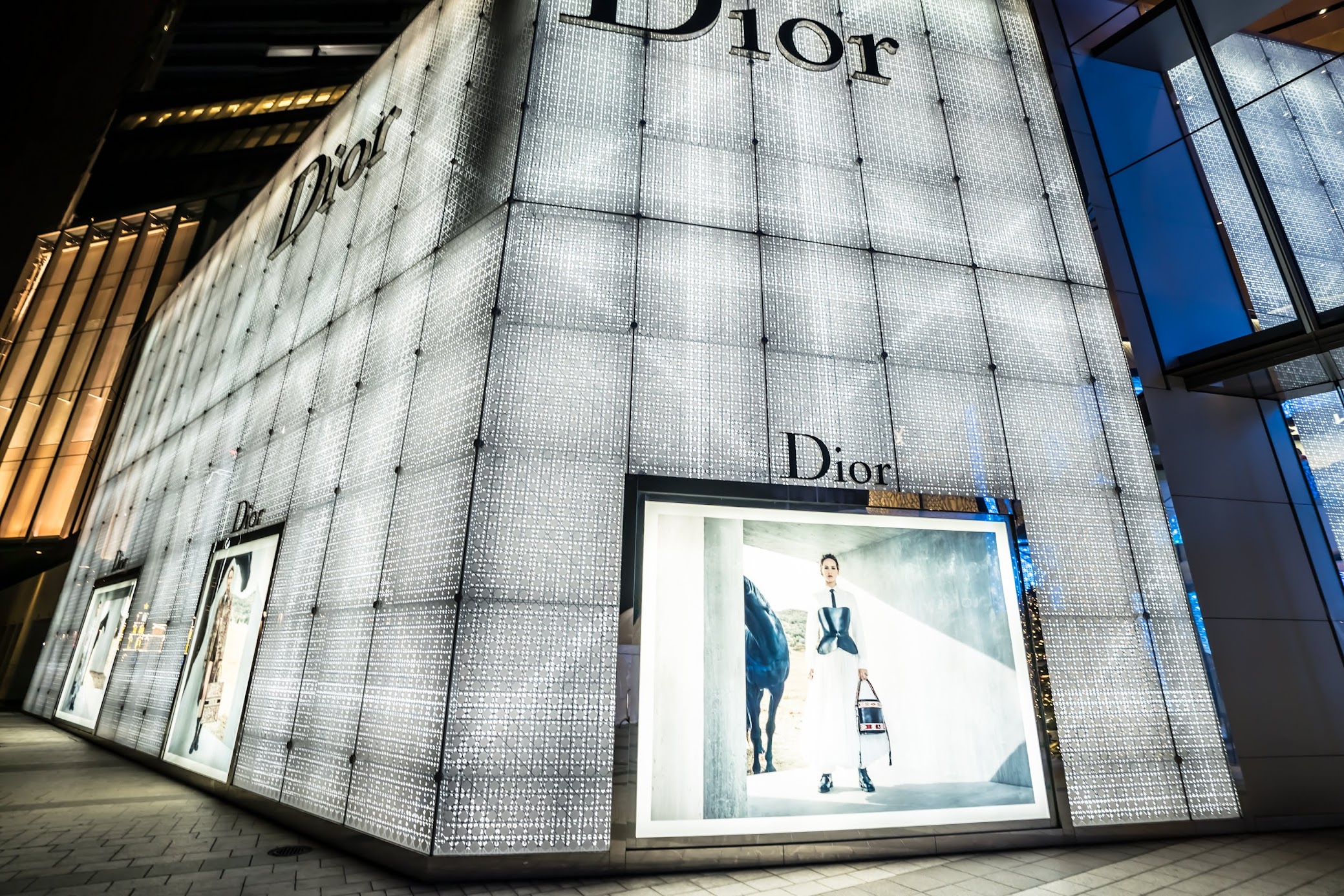 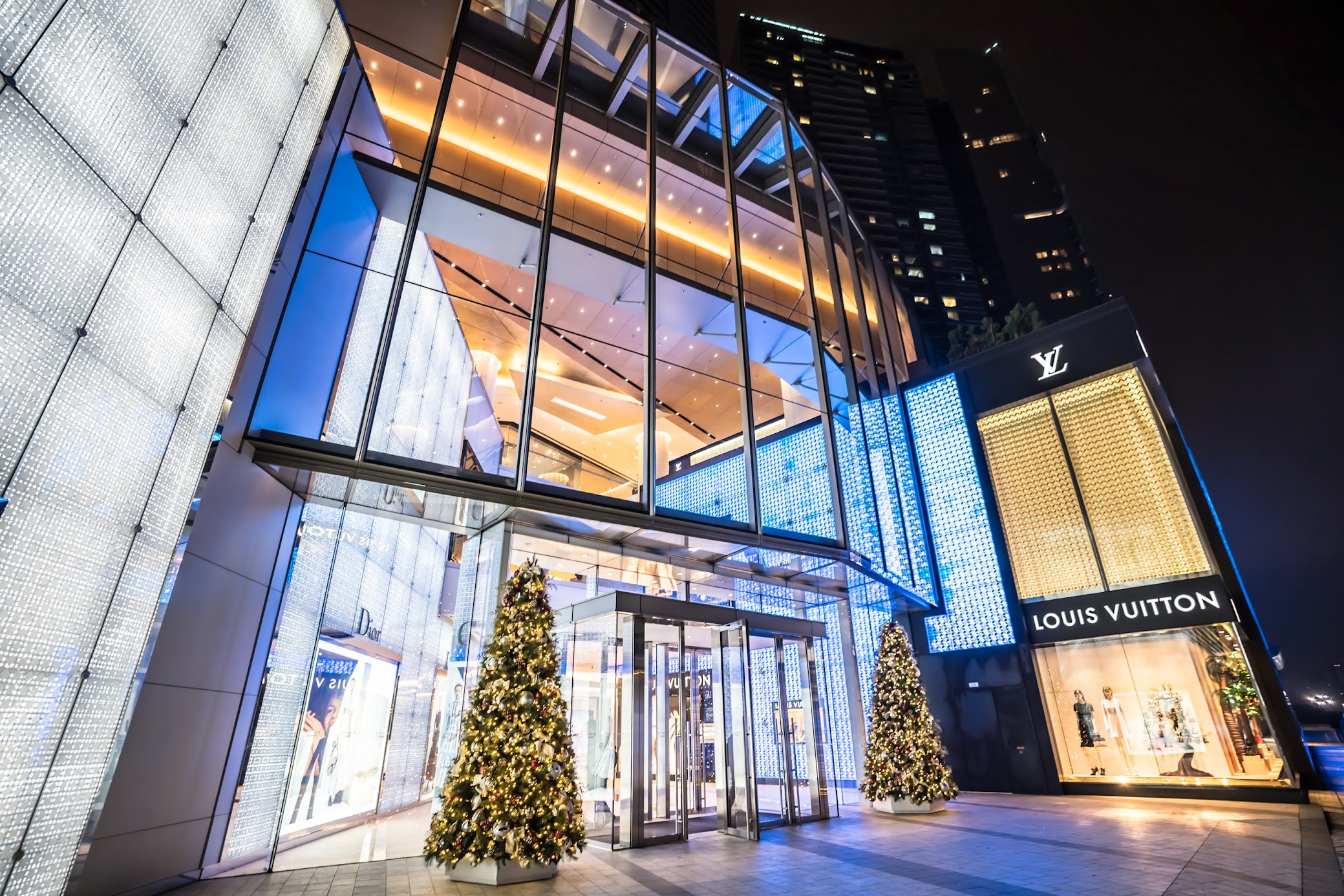 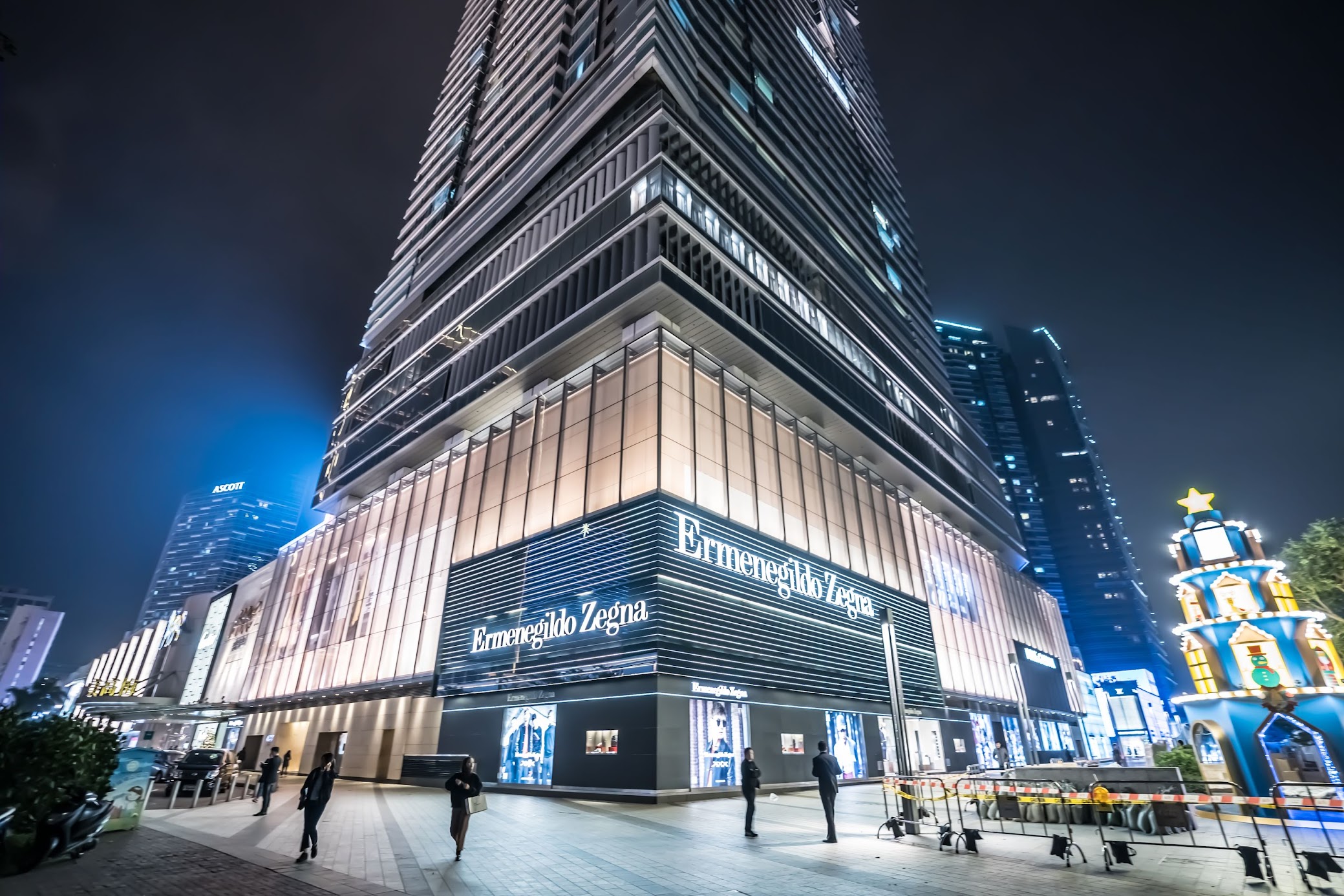 Wynn Macau, which I mentioned in the beginning of the article, was lighted up in the evening. 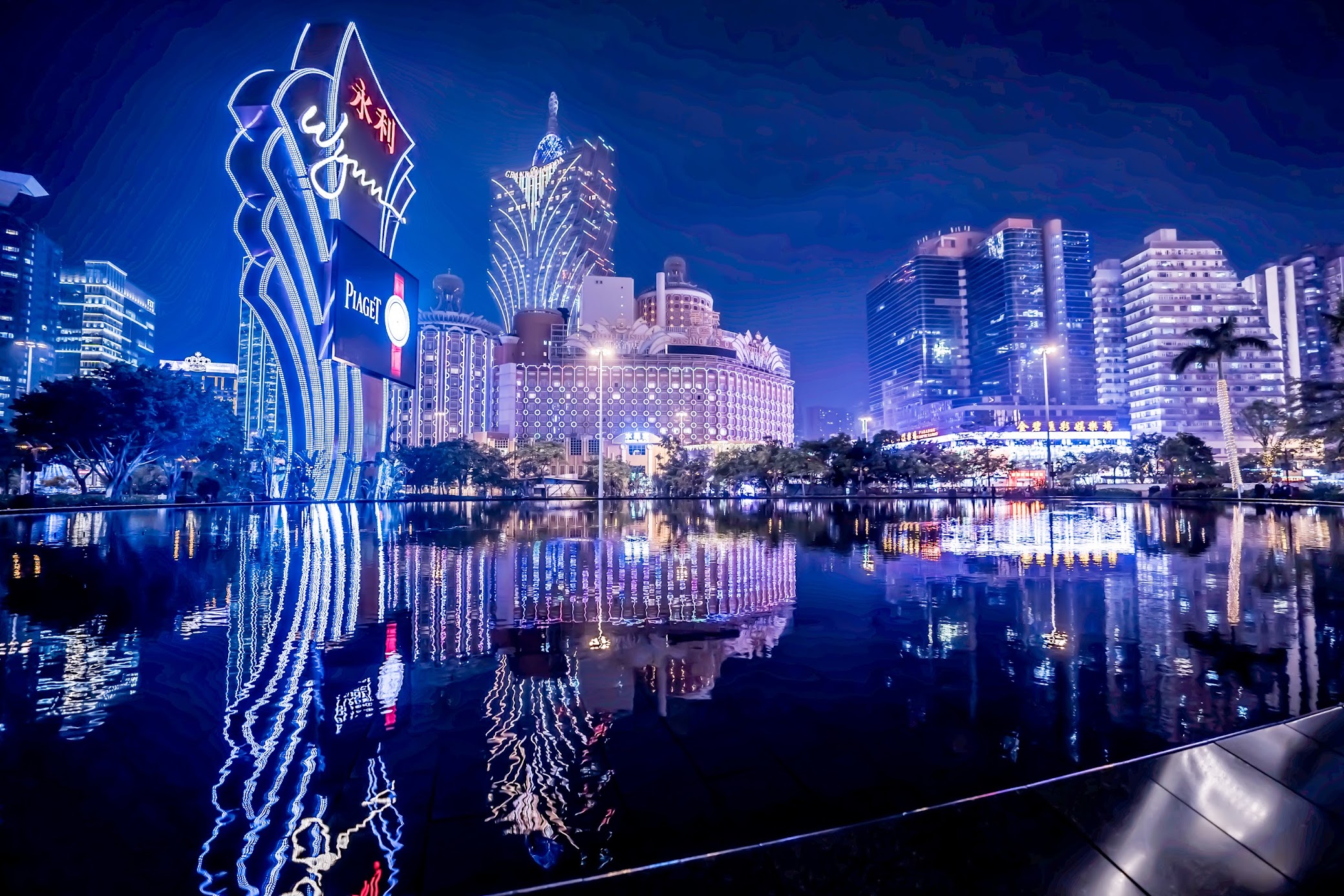 I wish I earned enough money to stay Wynn Macau 🙂 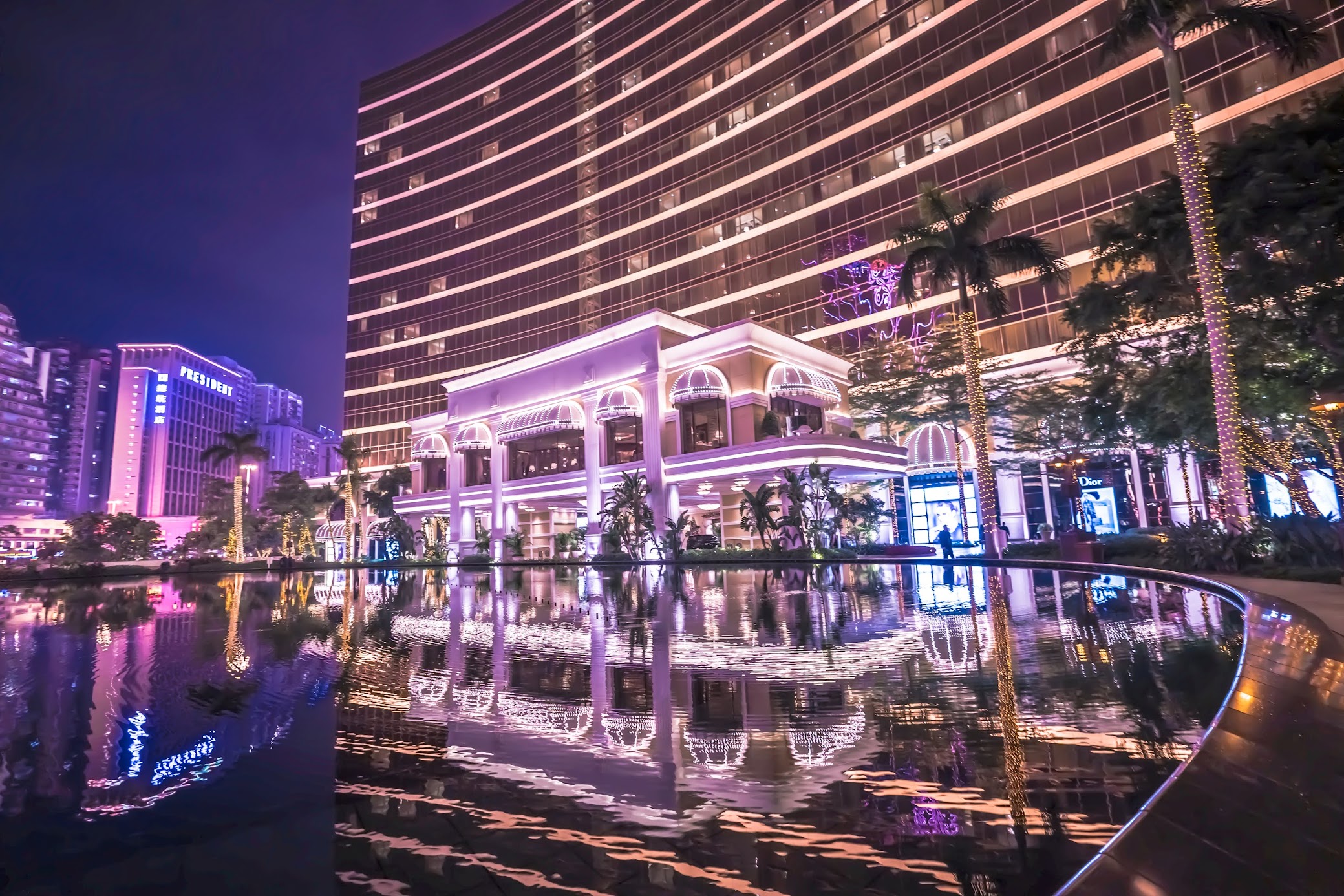 The “Performance Lake” has started. 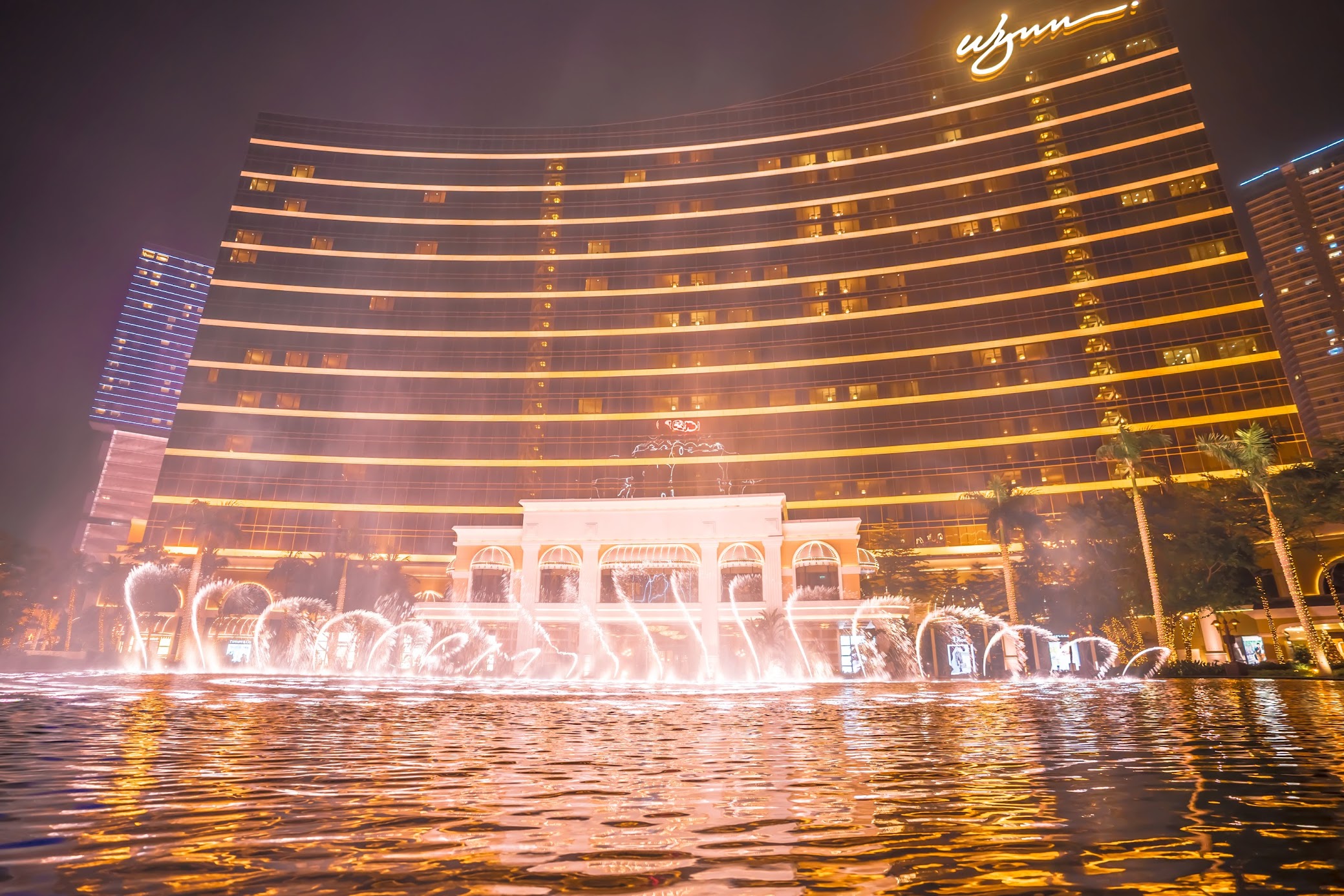 The show was conducted every 15 minutes. 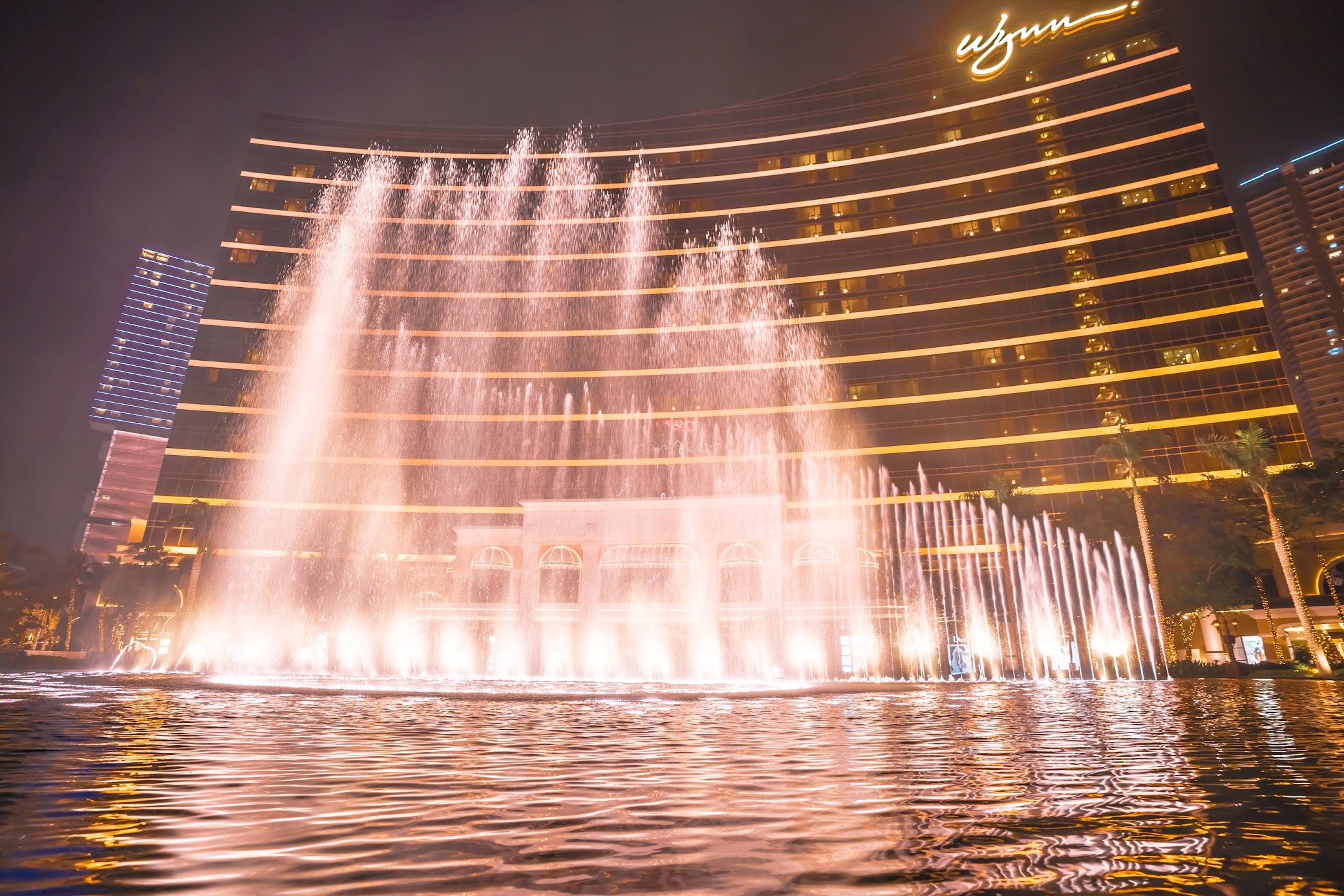 I found it difficult to take fountain show pictures. 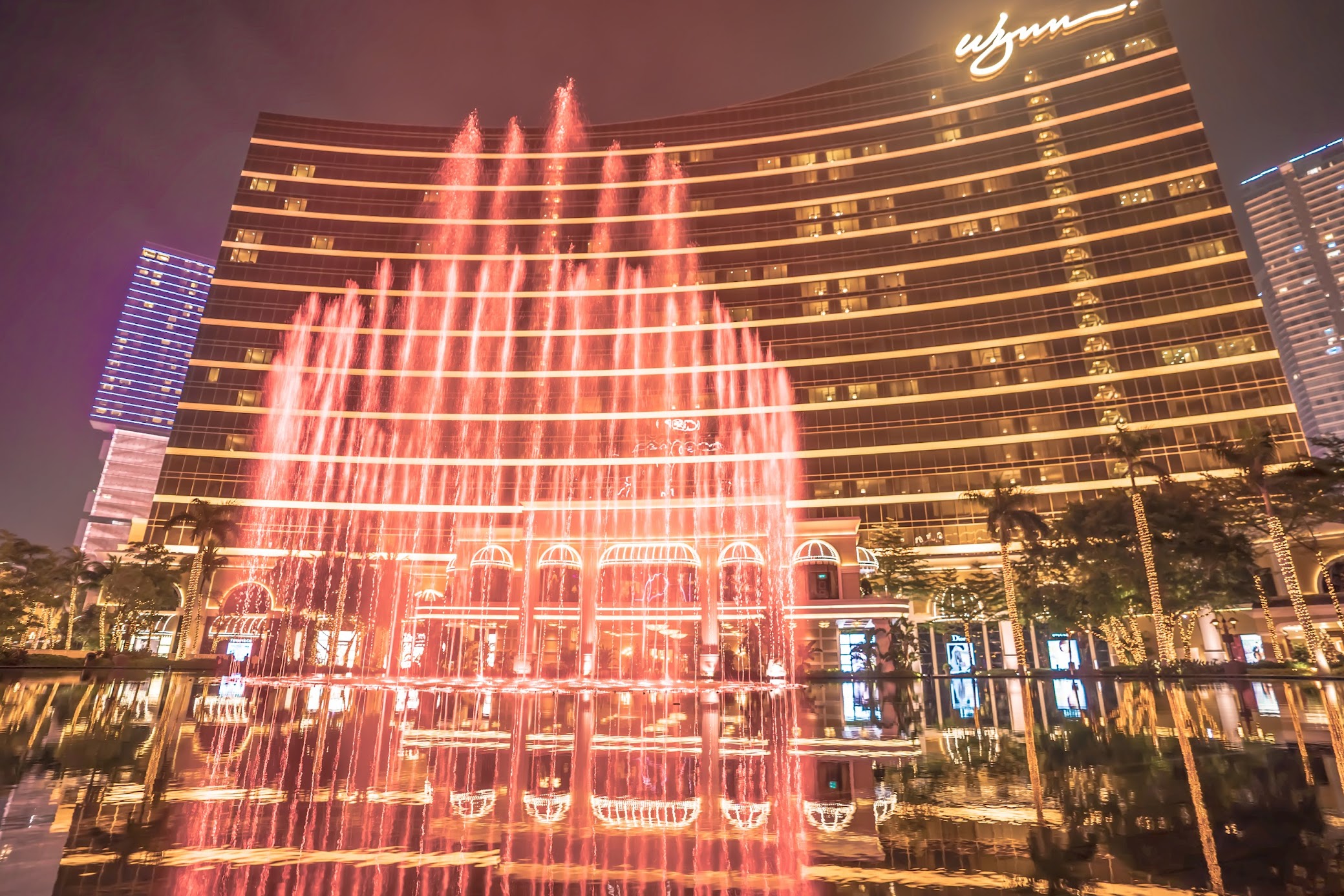 Finally, I will take pictures of Lisboa where I stayed and “Grand Lisboa Macau (澳門新葡京酒店)” adjacent to Lisboa. 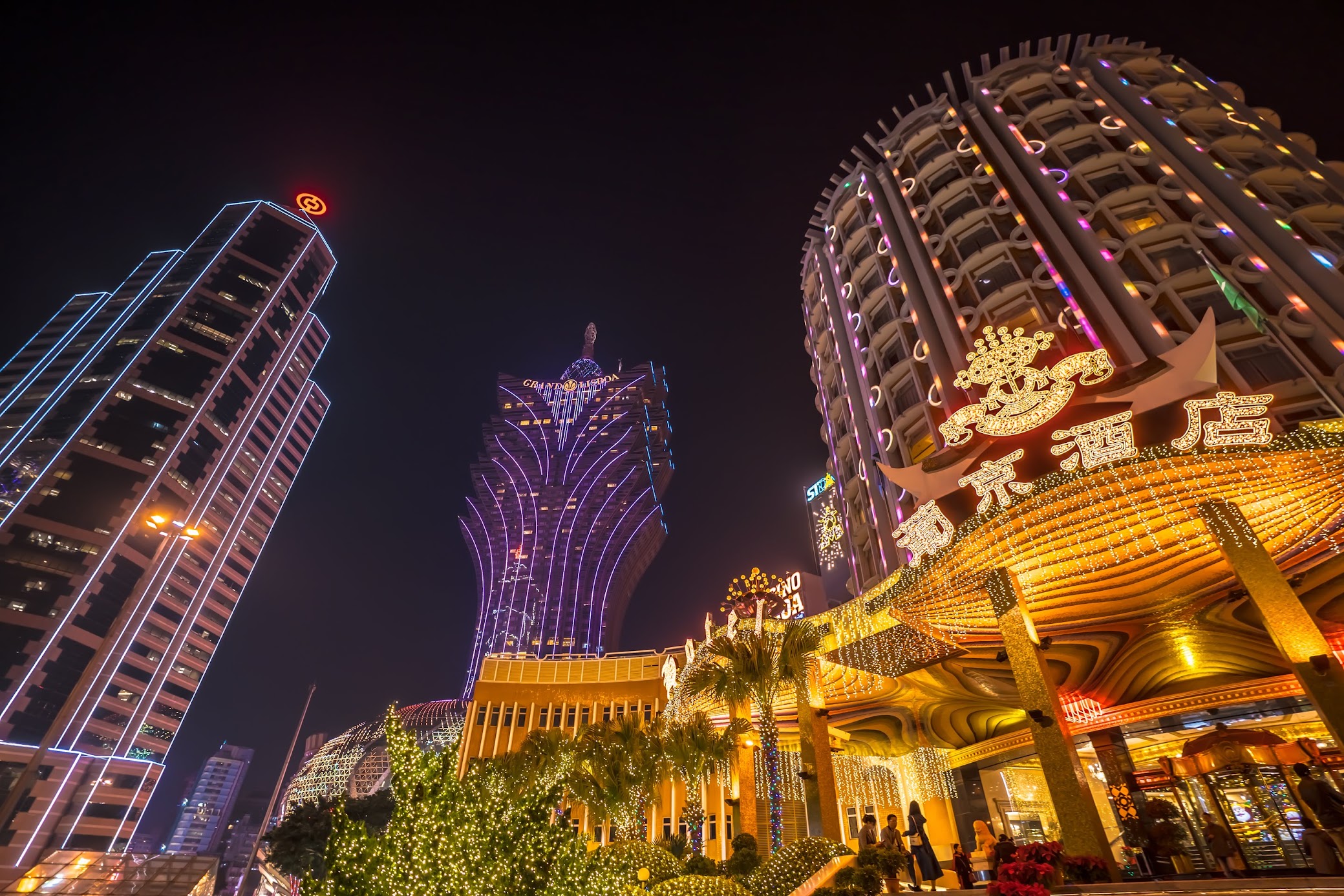 The right building was Lisboa and the left one was Grand Lisboa. 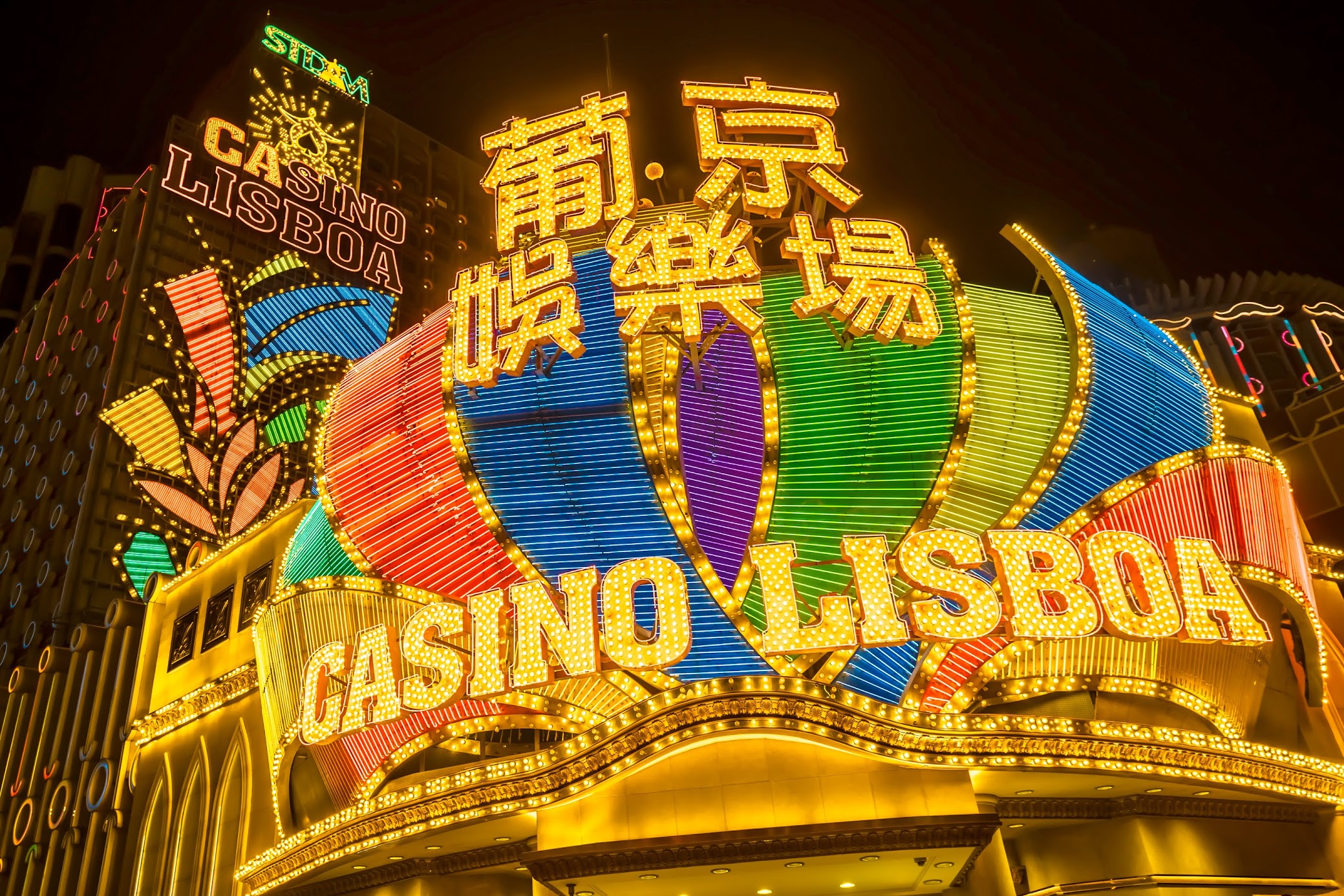 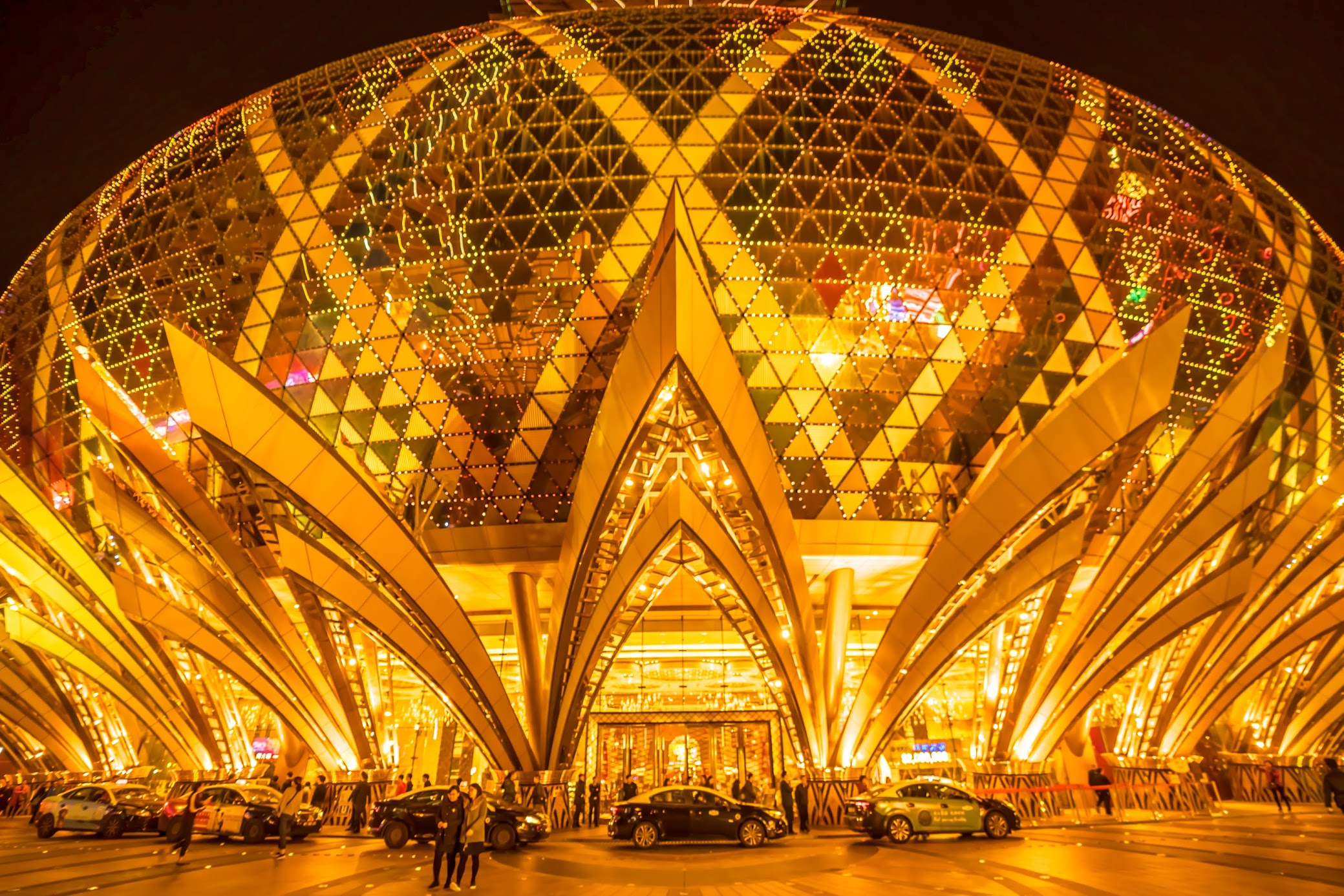 While Lisboa is known as the pioneer of casino hotels in Macau, Grand Lisboa, which was built later, is more luxurious than Lisboa. Thus, room rates in Lisboa was less expensive than those in Grand Lisboa, so I chose Lisboa for my stay.

Lisboa was relatively old, but its interior was gorgeous. 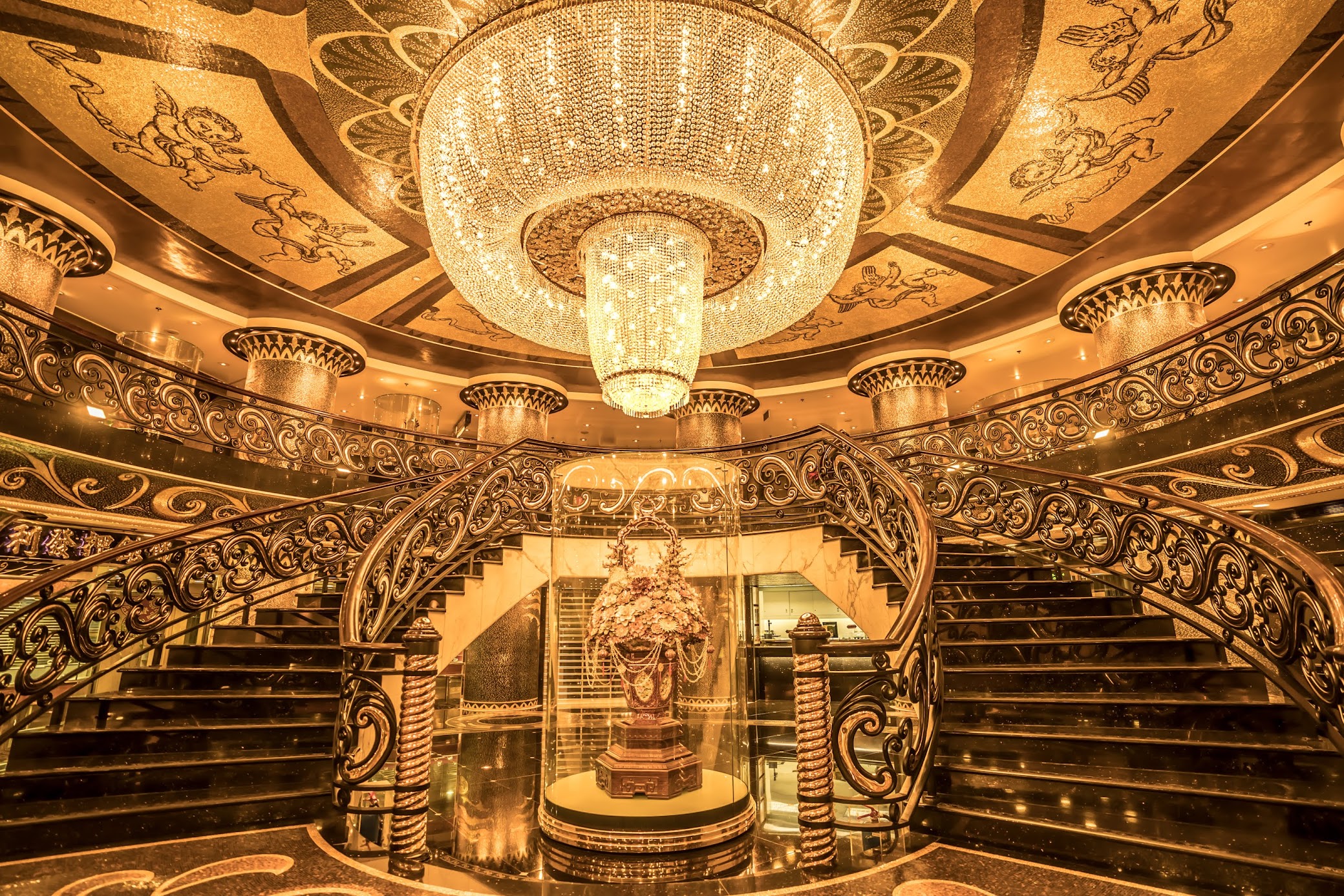 What’s more, I was glad to see that free fruits were provided for hotel guests. I missed to have a dinner, so I took them for today’s dinner. 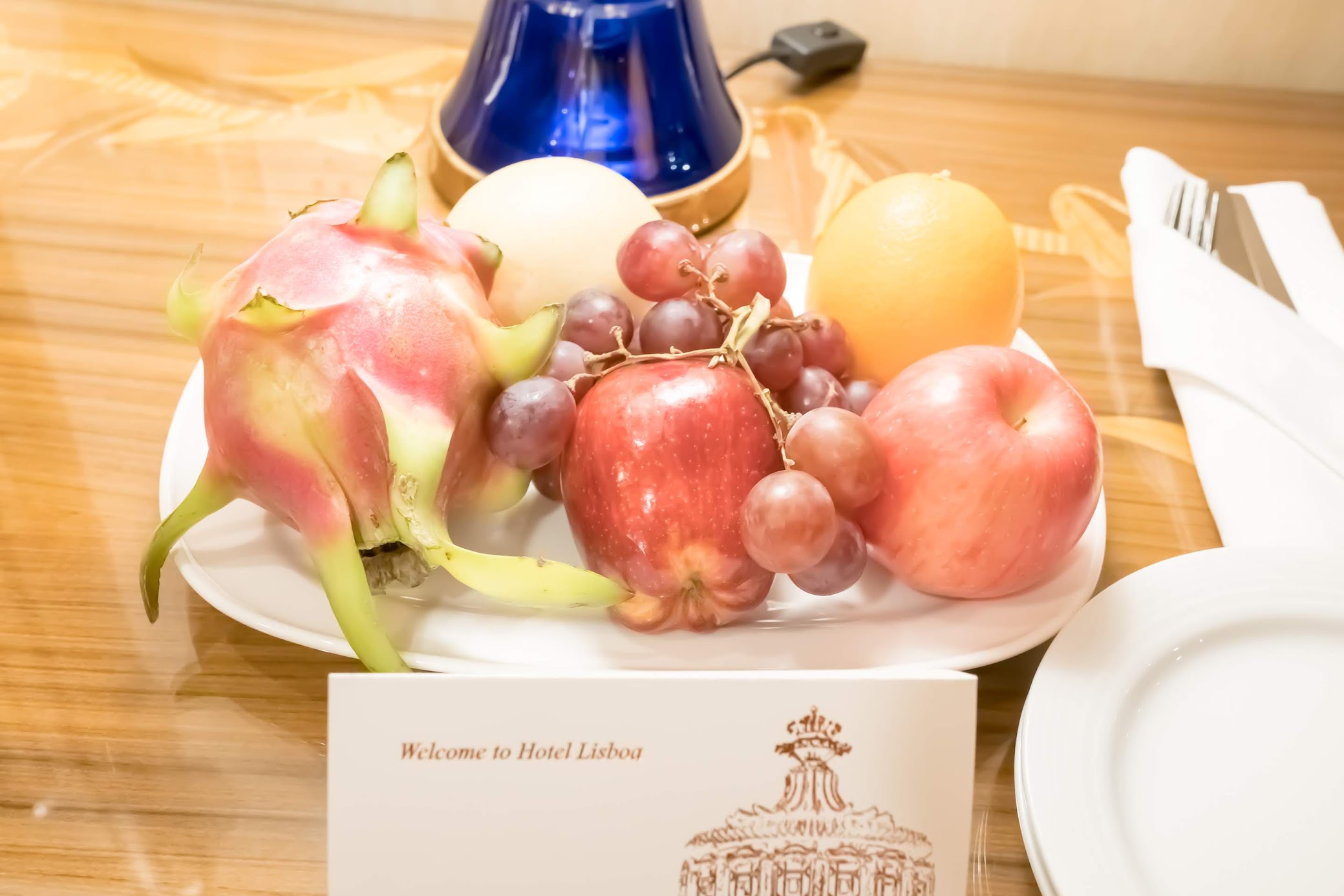 Then, the first day of my Macau trip was over.

That’s it for the article about night walk around Lisboa as part of Day 1.

As I spent lots of time on move to Macau on the first day, I walked around Lisboa just in the evening. However, there were several attracting facilities around Lisboa such as Grand Lisboa, MGM MACAU and Wynn Macau. So, I was able to enjoy walking around Lisboa 🙂

In the next article, I will write about Penha Church etc. as part of Day 2.